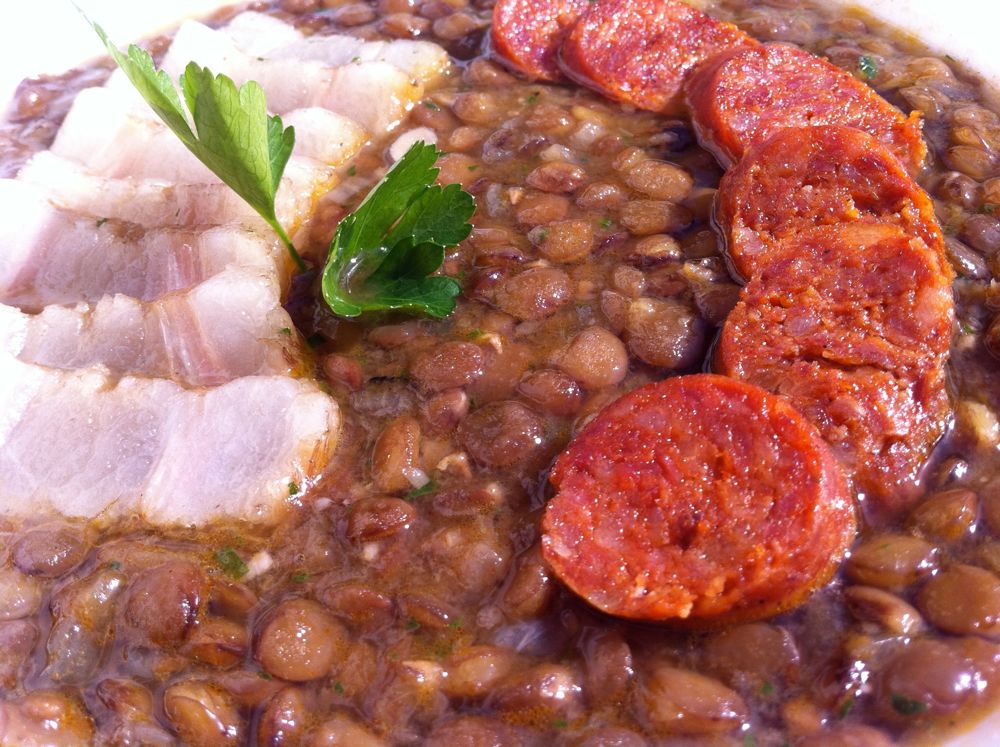 a sprig of parsley

We can not leave the winter without eating at least one good pot of lentils. My favorite legumes. And the best i had them here in Spain. There are several quality and cooking's variations: green, brown, yellow, stewed, steamed or in soup. It 'a very tasty legume, delicious even without meat. But with pork sausages, it's a marvelous combination. My favorites are versions are with cured ham, cured chorizo sausage, black pudding, lard, a trio of those or even Italian-style with "cotechino"sausage. Today I decided to combine them with Spanish "chorizo" and lard (salted). I do not recommend the use of parmesan cheese. It sours all and in particular with "chorizo".

Saute the chopped onion along with the whole sausages (pricked with a fork) and oil. Add the minced garlic and after a minute the grated tomato together with the paprika (possibly the Pimienton de la Vera, which has a particularly smoked taste ). Rinse the lentils, drain and add to the mixture when the tomato has reduced dawn. Add water, a bay leaf and the  whole lard or cut in half. The time of cooking will depend on the type of lentils. I used a big brown lentil that cooks fast. Remember that lentils do not need to stay overnight to soak. Skim occasionally to remove impurities formed on the surface and remove the excess fat released from the sausages. By the end of cooking add salt and stir in the chopped parsle. Serve with the bacon and sausage cut into slices.