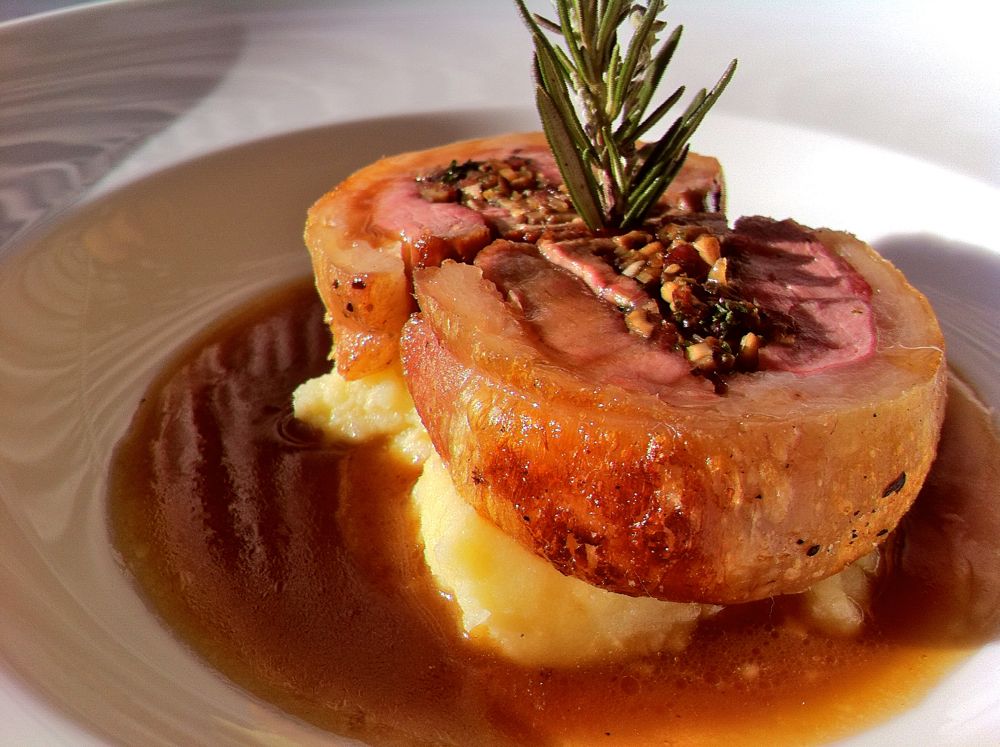 The saddle is one of the most noble cuts of lamb. It 's the end of the loin after the ribs, at the height of the kidneys. It is a perfect piece to stuff as once it is boned already has the right space for the filling without having to cut into the meat. Also it's a tender part and therefore does not need long cooking. The roasted skin in is crunchy and light. Different from that of a pork. Roasting is the best way to enhance the flavors and textures of this exceptional cut.
For the filling choose tasty elements as cured meats, sausages, prunes, raisins, nuts, pine nuts, almonds, etc.). I wouldn't se just simple vegetables. Those as garnish!.
As its is winter I used mushrooms (dried and fresh), thyme and prosciutto to give even more strength and flavor. 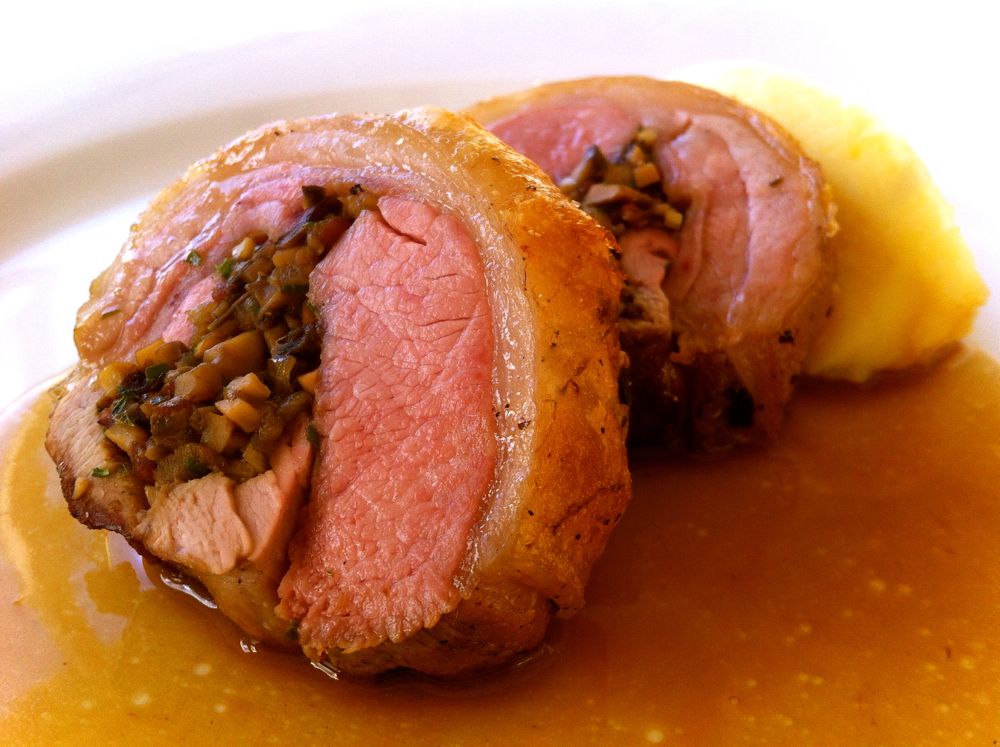 Let’s start with the filling. Cut the ham into little cubes  (brunoise) and fry together with the finely chopped onion with a tablespoon of ‘oil and one of butter. When just browned add the dried mushrooms drained and chopped (previously hydrated in water for 20 min.). A couple of minutes and add the chopped fresh mushrooms too. When browned as well, add a dash of brandy and white wine. Vaporized alcohol, add the chopped garlic and parsley and turn off. Once cooled, if you want, you can add an egg yolk to help the texture of the stuffing.

For the sauce fry the shallots, cut into slices (not too thin), along with 2 tablespoons of butter. Fry at medium heat until golden brown or lets better say caramelized. Add 2 teaspoons of brown sugar to accentuate the sweet and shortly after half a glass of brandy,one glass of white wine and reduce by half. We incorporate the broth and reduce until it remains 1/4 of the initial volume. We pass through a fine sieve and back into the pot. Season with salt, reduced down to a velvety texture and turn off. 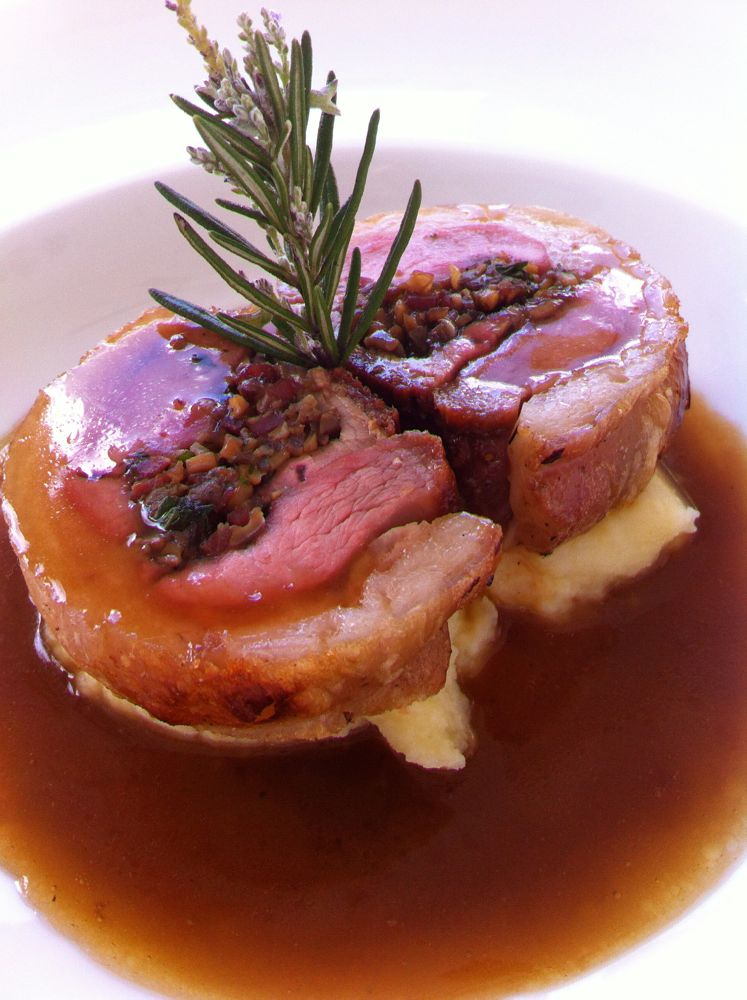 Take the boned saddle of lamb. The entire saddle would be the best thing but not often it is available in all shops as the butchers usually divides them into two parts along the loin ( unless ordered in advance). So we take half of the saddle (for two people its perfect!) and detach the little fillet. Remove the excess of the fat without cutting the skin. Take a head of garlic cut it in half and rub on the whole inside fat and meet. Season and sprinkle some thyme. Add the stuffing along the side of the loin applaing a bit of pressure and cover it with the little filet remaining. We close by wrapping it in his own skin and tie with a butcher string. Mark all sides of the roll in a hot pan with oil and the had of garlic used previously. Add some thyme and rosemary under the lamb and bake for 10 min. At 180 degrees. When baked let the meat rest in its pan / baking tray for at least 10 min. before cutting. Very important the resting of the meat!

Cut into thick slices, served with a topping of your choice and this great sauce! 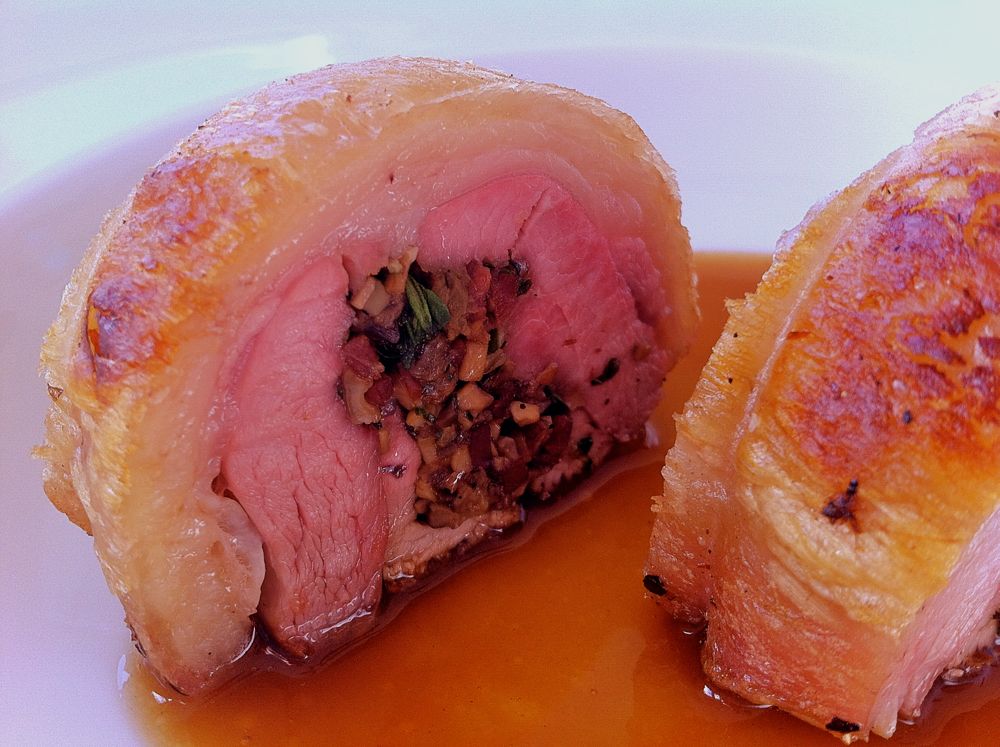 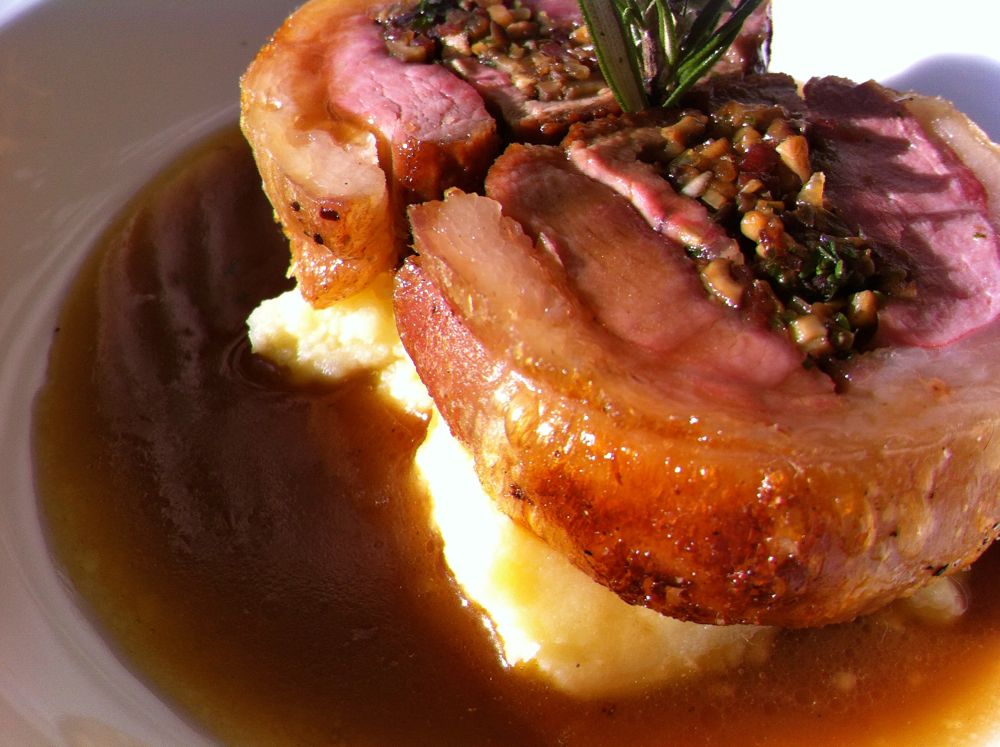